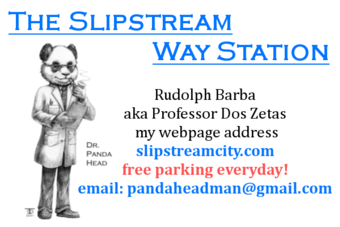 The good doctor has allowed me to use his image as the official logo for the Slipstream franchise. His image is recorded with the US States Copyright office (#1-5820934641); any and all reproductions must be done with permission of Rudolph A Barba.  All royalties for contracted use of his image derived from the sale of action figures, video games, t-shirts, tattoos, Halloween costumes, lunchbox pails, et cetera will be donated to the Winston Isaac Foundation.

A mutant as a result of the Chernobyl disaster of 1986, born nine months after the incident of parents that were maintenance workers at the nuclear power plant, abandoned shortly after birth at a monastery.

He resembles a come-to-life animation character; fittingly and cordially known as Panda Head Man. He’s good with his name for he accepts his uniqueness with dignity and aplomb.

Dr. Winston Isaac adopted him from a Russian orphanage while still a young boy and paid for his education. Panda Head Man was a child prodigy and by the time he turned nineteen he earned a PhD in computer software engineering.

Since his early teens Panda Head Man served as the IT geek and guru of all things digital for Dr. Isaac’s state-of-the-art laboratory.

With Dr. Isaac’s passing Dr. Panda Head, as heir to the foundation, held dear Winston’s dual mission statement: The advancement of scientific knowledge for society’s collective betterment, and the dismantling of clandestine forces that threaten the peace and freedoms of the global community; particularly those armed with power grid crippling cyber-malware, WMDs and not least of all, the rise of rogue godlike artificial intelligences.

While the doctor is a polymath with a glaring physical abnormality he has a heart that’s as big as his panda head.  Having an affable, witty, compassionate and charismatic personality, his oddity shortly becomes a nonissue, and for some folks, it is actually a positive accent to his persona.  Humanity is defined not by what you look like but rather by demeanor and character.